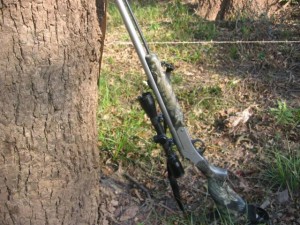 I bought my Mellennium Designed Muzzleloader “Buckwacka” .45 caliber black powder rifle about 3 years ago. I had previously owned and shot a few inline muzzleloaders since “coming over” from the traditional black powder rifle. Yet, when I shot those rifles and carried them afield, I never felt like I was shooting a ‘real’ rifle plus most of them left something to be desired in the way they shot and operated.

The Search For My Perfect Muzzle Loading Rifle Begins

I loved hunting with traditional black powder rifles. I loved everything about them except the occasional misfire. Heck, I never minded cleaning them! I resisted buying an inline black powder rifle for many years. However, being an deer hunter first and foremost, I finally gave in and started looking at inline muzzleloading rifles.

I figured that if I was going to use an inline black powder rifle, then it should be a flat shooting rifle. It should also be able to take advantage of modern technology but be a simple to operate rifle as well.

And just as important, it should feel like a rifle and not a toy.

I looked at all the rifles on the market at the time. I either borrowed my friend’s black powder rifles or handled all the latest offerings at the local Sporting Goods stores.

I finally found the Millennium Designed Muzzleloader’s ‘Buckwacka’ model in .45 caliber. It’s called the ‘Nitro Magnum’. I ordered the model with a Stainless Steel barrel and action with the Mossy Oak Breakup stock.

One reason I went with the .45 instead of the .50 caliber is because of the lighter bullets that can be used with the .45. Lighter bullets mean flatter trajectories. However, I didn’t want to go so light as to affect bullet performance on Deer. I still wanted some power when the bullet arrived on target. Especially if that target was 150 or 200 yards away.

Pro’s and Con’s of the Buckwacka

One of the things I really like about the Buckwacka is that it’s a simple design. It’s based off of the break open action of the H&R Rifles and Shotguns that many of us had as our first “real” hunting guns. (the photo is courtesy of MDM Muzzloaders)

My Buckwacka Nitro Maganum has a 25 inch stainless steel barrel. It takes a 209 Shotgun primer that slips directly into the breech plug. This I like a lot. You don’t need some silly disks, special nipples or other contraption to prime the rifle and make it shoot. Just put a 209 in the breech plug, close the breech and you’re ready to go.

The gun breaks down easily for cleaning. Ray Charles could break this gun down and clean it! The simplicity of this design is lost on many of today’s gunmakers. It doesn’t take a whole lot to make a black powder rifle go ‘Boom’. The way some of these new guns are being designed, you’d think it was rocket science!

My rifle came with Williams Fire Sites. These were neat ‘Glow’ sites, but I had no intention of ever using them. I knew from day one that I would be putting a scope on this rifle. I decided on a 3×9 Bushnell rifle scope. I had to remove the rear site because it hit the bell of my rifle scope.

I have been watching the new Nikon BDC rifle scope and really like the looks of it. One may find their way on my MDM muzzleloader before next season!

One thing that I dislike about my Buckwacka is that is doesn’t come with a side hammer. This is a must have if you’ll be mounting a scope on the rifle. In fact, I would rather have the side hammer than the Williams Fire Sites. I wish this was an option when ordering the Gun. The side hammer can be purchased from MDM for an additional $12.95.

When using a scope, the hammer can be hard to get your thumb on. The side hammer makes this a snap.

The Buckwacka also comes with a Limited Lifetime Guarantee. Another PLUS in my book.

Shortly after I bought the rifle, I had to call the company to ask which bases to use for the scope, since my gunsmith was having problems finding a matched set. I think I talked to a guy named Craig (although I’m not 100% positive) and he was very helpful and friendly. This counts for a lot when you need to talk to someone who knows the guns!

Matching A Bullet To The Buckwacka 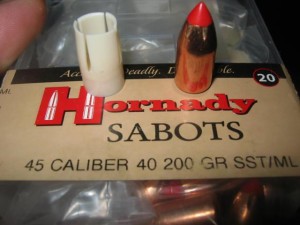 It made no sense to me to use an inline black powder rifle only to stuff it it pistol bullets or heavy conical type bullet!

I wanted a pointed bullet with a good ballistic coefficient. Why use an modern inline muzzleloading rifle and stay with a mini-ball type bullet that was designed for rifles made 150 years ago? If I was going to give up my ole smoke pole, it was going to be for something that made sense and would take advantage of the latest technology in bullet manufacturing.

The bullet I finally settle on was the Hornady SST 200 grain .45 caliber bullet.

With the Hornady SST bullets, the MDM Buckwacka turned in solid 1.25″ groups at 100 yards. On some days I would get some groups that were tighter, but overall I can count on tight groups day in and day out.

I sighted the gun in with a 100 grains of Pyrodex. I use the 5o grain pellets. They’re quick and involve no mess. Another technology advancement for muzzleloading rifles! 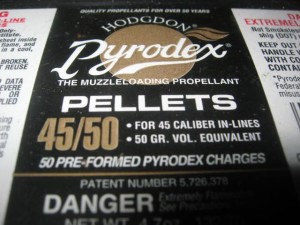 I have since started using 3 of the 50 grain pellets. I’m not sure what my group sizes are because I haven’t shot it for groups with the 150 grains of Pyrodex, but my bullets were right on when I fired test shots at targets set up at 75 and 100 yards from a clean, cold barrel.

Right off the bat, I’m going to tell you that the Hornady SST 200 grain .45 caliber bullets are the most devastating bullets I’ve ever used.

The first year I had the Buckwacka, I shot a Coyote at about 80 yards. It looked like the Ole Boy had been in a bad car wreck!

This year, I shot Deer at about 70 and 90 yards. The 8 pt. buck I shot first was staring at me when I dropped the hammer. The bullet went between the left should and neck at an angle – breaking the neck and lodging somewhere in the back of his body cavity.

When I field dressed the buck, it looked like I had shot this ole boy with a modern centerfire rifle. The inside was literally soup. Total devastation.

When I skinned this deer, the wound channel was so large, I started to take pictures. However I thought better of it because I know some people wouldn’t appreciate these pictures. Trust me when I say it was very impressive!

The antlerless deer I shot was the furthest. It was nearly broadside when I shot. It was a rather small deer so the bullet didn’t have room to really expand before exiting.

I feel a lot of the effectiveness of this bullet is due to pushing it out of the barrel with 150 grains of Pyrodex, but I’m equally sure the damage would be impressive with 100 grains also.

This is an simple, accurate and reliable blackpowder rifle. It has few moving parts and no extra parts you must carry around to make it shoot. No special nipples or special caps to carry.

Anyone who’s hunted with black powder rifles for any length of time know’s how easy it is to forget caps or other essential gear. I’ve never understood why some of the blackpowder gunmakers keep designing and making guns that you have to carry extra parts with to make them shoot.

That’s one thing that appealed to me about the MDM Buckwacka. Simple and accurate. I have all I need to make the gun shoot in my speed loader. I can shoot several times without cleaning the barrel and when I get it home at the end of the Season, it’s easy to take down and clean.

This rifle would be an excellent rifle for small framed hunters as well. There’s no doubt in my mind this rifle with 70 grains of Black Powder or Pyrodex would be lethal on Deer, especially with a 200 grain or lighter bullet. I’d choose the Hornady SST for this loading also.

For people who hunt Western Big Game like Whitetails, Mule Deer and Antelope, your long range muzzleloading rifle has arrived, it’s called the MDM Nitro Magnum Buckwacka in .45 caliber! This also goes for you Eastern hunters sitting over open fields and clear cuts. This would be the gun if I had to hunt in a Shotgun or Muzzleloader only state like Iowa. There is no shotgun out there I’d rather have than my Buckwacka! You don’t have to be limited to 100 yard shots any longer!

Best of all, the Buckwacka feels and shoots like a “real” gun!