Nikon P 223 Review: What It Brings to the Table 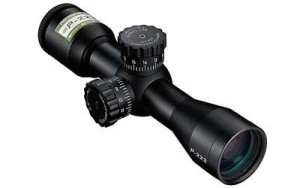 Rated 4.7 out of 5 stars from over 220 reviews! Click the image for prices and reviews!

Nowadays, shooting, and hunting has grown in popularity in the USA, such that gun culture is almost synonymous to being American. If you want to try your hand at hunting or if you’re a hunter who wants to get an edge on your hobby, you must choose only a great rifle suited for your needs, but also a great scope.

When it comes to target practice, shooting, or the logistically complex act of hunting wherein you have to hide yourself from your prey while at the same time maintaining your shooting accuracy during low-light conditions, you want a riflescope that can keep up and adjust during any circumstances. That’s exactly what Nikon P-223 3×32 Matte BDC Carbine brings to the table and then some.

The new Matte BDC Carbine riflescope is specifically developed for the .223 Rem /5.56 NATO round 55-grain polymer tip bullet, which means it offers pinpoint accuracy with this particular bullet type’s trajectory. It also provides a 200-yard crosshair with “hash marks” at around 400 to 600 yards. In other words, when it comes to hunting and sportsmanship, you’ll be hard-pressed to find a more reliable riflescope. Scopes assist you when it comes to doing a long shot or getting a longer and more accurate shooting range. Open-sight shooting, after all, is a nightmare without a scope. The Nikon P-223 3×32 Matte BDC Carbine takes away the difficulty of long-range shooting using only your eyes in a way that’s superior to other scope types of its class.

It’s an easy-to-use, fully functional riflescope that is highly recommended for beginners. Nikon has always been dependable not only in the camera lens and shooting field, but also in the riflescope field because they’re masters of imaging and optics. The Nikon P-223 has been developed to withstand the roughest of environments while still maintaining superior accuracy throughout, even at the longest ranges. You can act like a sniper during covert missions or a soldier in the middle of a guerilla camouflage operation with this “all-terrain”, highly accurate type of scope that can handle moisture, pressure, and low-lighting conditions at the same time. Its sighting speed is also quite impressive, which is why hunters are going in droves to buy this piece of high-quality riflescope equipment.

However, the main claim to fame that the NikonP-223 3×32 Matte BDC Carbine has isn’t its quality, even though it’s a topnotch rifle accessory through and through; it’s actually the fact that it’s priced so affordably (at $145.07 at the time of this writing on Amazon.com, with a List Price of $149.95) that makes many a gun owner do a double-take on this Nikon beaut. Coupled with the fact that most gun enthusiasts favor the Nikon brand on all things riflescope-related, and one can easily see what a great deal and offer it is. Simply put, it’s reasonably priced and it has tons of features that make it a great riflescope primer for beginners and advanced gun users alike. You’ll be hard-pressed to find another $150 riflescope with the same high quality and value as the Matte BDC Carbine.

Here are the benefits you can get out of the Nikon P-223 3×32 Matte BDC Carbine.

What Are Customers Saying?

“The Most Value I’ve Gotten for My Money in a Scope!” – By Miles Mochrie

I bought this scope for a month’s time, and so far I believe it’s one of the best deals I’ve ever come across. Sure, I’ve seen and used 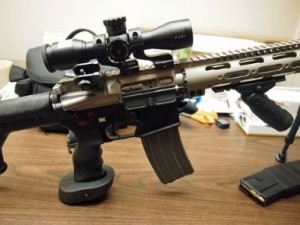 Rated 4.7 out of 5 stars from over 220 reviews. Click the image for discounts and reviews!

better. The lack of magnification might even be a turn-off for most people. However, my son has gotten into guns and has enjoyed using this lens with his AR 15 at the firing range for weeks’-on-end, which tells me that this 3x magnification beaut is the perfect riflescope for the amateur gun owner. It has all the specs needed to assist someone towards gun usage competency, from its zero-reset turrets to its 98% light transmission that makes the dimmest of afternoons seem like as bright as high noon. Even advanced users like me love this wonderful scope.

After I’ve cycled through 400 to 500 rounds on my Bushmaster AR 15, I have to say that it’s “smarter” than the average lens and pound-for-pound the most cost-effective riflescope I’ve ever owned (and I’ve owned a lot). I have absolutely no issues with it sans the lack of magnification (which you won’t need unless you’re some sort of marine training to be a sniper anyway). The BDC feature of the scope is amazing… especially when it’s coupled with the iPhone’s Nikon Spot-On (is worth around $5.99 when I bought it). Isn’t technology great? Anyway, my son has noticed that his accuracy and understanding of ballistics has improved significantly ever since he started using this brand of scope with the app. They work in tandem in improving your accuracy.

To be more specific, they take weather conditions, range, lighting, ammo type (hand load or MFG), and caliber into consideration before you can take a single shot. That’s because not all gunmen are like John Wick, Hitman for Hire, who could automatically target and destroy things by reflex and instincts. However, you yourself can train and hone your sharpshooting skills from a distance and at 1/4 MOA or more (as much as 3 MOA, even) with the help of this scope. Invaluable info will be fed to you through the app, particularly precise data on a range with a 75 yard maximum length but you want to zero-in on a 100 to 200 yard range.

As any good hunter knows, as soon as you change your ammo, you need to adjust trajectories and estimates. Thankfully, the app also comes complete with a ballistics table that modifies your BDC marking range with up-to-date info, particularly in terms of new yardage. For beginners, it should sound complicated, but once you get the hang of it, you’ll be so scarily efficient with your gun that you’ll automatically become the apex predator of your area. The app lets you play around ammo types without wasting ammunition. You’ll always get the best yardage, estimates, and ballistic match for your targeting application. Couple that with solidly built turrets that come with solid clicks every time adjustments are made, and you’re practically golden.

Simply put, this is an awe-inspiring scope that allows for high-level performance with the Nikon Spot-On iPhone app. However, even if you’re not too savvy with cellphones but would rather know the raw benefits of the scope alone, you won’t be disappointed. In fact, you might even be scratching your head in disbelief that this $150 riflescope is priced the way it’s priced. It’s unbelievable, in a sense. The Nikon P-223 3×32 Matte BDC Carbine is for you if you’re looking for a cost-effective, high quality, and fully functioning riflescope that’s a perfect fit on any quality AR gun (like the AR 15 and the like).

Getting a scope of this caliber at this price is almost unheard of. It’s not an overstatement to say that this scope is at least worth double its price in terms of what it brings to the table, plus some comparable scopes can reach from $200-$400 in overall cost. Regardless, it’s highly recommended because it’s designed to meet any AR gun owner’s needs while still fitting a tight budget. It has amazing features such as good MOA, durability, excellent light transmission that’s found in all Nikon lenses, and so forth. This is a guaranteed best seller at that. It is ranked 15th in the Sports and Outdoors Best Sellers list, to be more specific.

You won’t regret buying this rifle because you’ll get to maximize your investment with it. The viewfinder is generous while offering plenty of eye relief, for one thing. It also gives you loads of ways to improve on your hunting and targeting accuracy, from anti-parallax features to 98% lucidity in even the lowest of lighting conditions. You will not feel gypped by this scope at all, and it doesn’t feel “cheap” in the “low-grade” sort of way. It has excellent quality for its price, it’s made by a trusted brand, it has immense clarity and light transmission, the edges never distort, and its field of view is nice and wide. It’s not perfect though; it has no quick-release mounting system and it’s slightly on the large side for a scope of its kind.

It’s the most convenient, durable, and “cheapest” (or rather, “cost-effective”) of all riflescopes of its grade and magnification. Sure, you can get higher magnification scopes around, but if you don’t need that 4x, this is well-worth the less than $150 you’ll spend on it. Hunters particularly love this scope for its all-weather, all-terrain capabilities. It can be used at any time and through any weather conditions while still maintaining a fog-free, waterproof interior thanks to the sealed-in nitrogen inside it. To sum it all up, this riflescope is a must buy that consumers in the guns and armaments field should take a second look at. It’s ensured to deliver the goods. Overall our Nikon P 223 Review is rated 4.7 out of 5 stars.