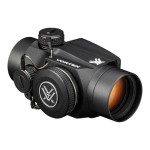 Rated 4.4 out of 5 stars from over 140 customers. Click the image for prices and customer reviews!

Vortex Sparc is a type if red dot device used for the AR15’s. The device is mid-range in cost and is used for short range targets.

It is relatively compact and pretty affordable costing around $289, it has been considered to be an alternative for the police patrol rifle and other weapon systems as well.

The package would include the Sparc optic, rubber lenses and hood, 2x multiplier, 3 different height mounts 2 CR2354 batteries and all the necessary screws, wrenches including a cleansing cloth as well.

The specifications of the vortex include being waterproof and shockproof as well. There is unlimited eye relief and a reticle dot color of red. The size of the dot is about 2 MOA with variable 10 position intensity and night vision mode as well. It weighs at about 5.2 ounces and length of about 3 inches. There is a 22 millimeter objective lenses diameter which has the same size as the ocular diameter.The battery life for maximum brightness is about 120 hours, and 3400 hours for minimum brightness.

One word and it is very straightforward. The brightness setting is ok for a mid-day setting, and it is remained untouched while it is in use. The back of the light itself has an easy up and down arrow for lighting adjustments, which makes it very easy to operate. The night vision button may need to be harder and well-kept and relatively harder to press because it is seldom used, but generally it is fine. The night vision can be tapped accidentally because it can be hit all the time. It would also be easier that a bra type cap is not used, instead a regular flip up would be better and much easier to pop up. Some may consider the 1MOA click adjustment too big and a .5 MOA would have been easier. It is good though that the safety wires do not impede the use of the caps and it doesn’t fall in a sewer gate or something similar or worse.

The device features a multi height mount system that include the high mount, low mount and a spacer that can also be adjusted and contained in order to create several mounting heights such as the lower 1/3 co witness which is about 40 millimeter, absolute co witness at 37 millimeter, 21 millimeter and 18 millimeters as well. There is relatively unlimited eye relief to ensure that there is non-critical eye relief for that rapid target acquisition. The intensity of the dot can also be adjusted, it actually has ten variable illumination settings, the lower 2 settings have a night vision compatibility. The battery life as mentioned above is very significant as well. It has a 12 hour auto shut down feature that can literally maximize the battery’s life, Typically it can last for about 300 hours at max brightness, and at 5000 hours in a min brightness settings.

It is very important that the coatings are typically anti-reflective on all the air glass surfaces, with an increase in the light transmission. The display of the red dot is also very visible even if used in broad daylight.

The device is relatively very compact and light weight as well making it much more convenient. The O rings that seal the whole device prevents it from getting wet or retain moisture, dust or debris penetration, this gives you a reliable performance in any kind of weather or any challenges in the environment. The device is also fog proof. It also has the nitrogen gas purging capacity and it also has a waterproof capacity. The device is also surprisingly shockproof because of its very rugged construction that can withstand all types of recoils and impacts as well. The finish is a low glare matte finish that adds to its durability. It can operate in extreme temperatures, up to -4 degrees and up to 158 degree Fahrenheit.

There are several tests done to check on the efficiency of the equipment. One test includes throwing it without its AR 15 in a 50 yard line of range. The device remained intact and the point of impact of the ground was actually dry with hard dirt and grass. When it was remounted and fired again in 20 additional rounds through a fresh target, all the rounds are in tight groups and the zeroing is actually maintained.

Another test includes the drop test. It was removed from the AR15 and was dropped 3 times from an 8 feet ceiling to concrete flooring. Making sure that the device is falling from a different body part each time. There was a dentation in the aluminum bezel around the objective lenses and there are a few scratches on the finished surfaces. Throughout the drop test, the red dot was turned on. When it was remounted and fired 20 rounds at a new target, all rounds still were in tight grouping and the zeroing was also maintained.

Test number 3 is a water test. The sparc was placed inside a bucket with water covering it. The water touches all angles of the equipment; it was left in 5 minutes. After 5 long minutes, the red dot was still on and functioning. They used high pressure air from an air hose to blow the water away. While attempting to remove the water through air pressure, they also have observed that the interior was dry, there was no droplets observed inside the optic or any fogging. When remounted and 20 rounds were shot, all rounds are still in tight grouping.

Test number 4 is a temperature test. They left the device inside a freezer for 3 hours, checking it from time to time for functionality and survival over very low temperatures. After freezing the device for 3 hours, it still continues to function well. There is a thin layer of frost on the exterior coating of the lenses but it can easily be wiped out though with the provided cleaning cloth included in the package. When it was remounted and fired for 20 rounds, the zeroing is at the temperature difference of about 80 F outside, causing the lenses to fog a little. This may not be that realistic in a real world use, the groupings of the shot though was still tight and there is clear maintenance of the zero.

This last test is still a temperature test, and unlike the latter, this is a heat test. Still mounted in the AR15, they heated the sparc with a heat gun until that it was already too hot for touching. During the heating process, the rubber covering started to heat up and began producing smoke though none of the rubbers were deformed in the process, the dot remained intact in the process as well. Just like the previous tests, when fired up 20 rounds, the shots are still tight and the zeroing still maintained.

The website amazon.com complied vortex sparc reviews and majority made a very positive result. Husky 0311 who is a Sergeant in one of the police departments in the Pacific North West, and have been on a multi jurisdictional SWAT team for over 13 years said that one of the things that made him impressed is the ability of the device to hold on to the zero exceptionally well. The device is small but reasonably able and reasonably priced as well. There are also several reviews regarding its durability to certain pressures that hold true with regards to the tests that the device have undergone as mentioned above. There are several reviews though that confirms it to be good only at a certain point because of minor glitches, but the overall functionality and overall delivery of the intended use is outstanding.

There are several reviews that prove the functionality of the device. Before deciding on investing into anything that you might want to use forever, always remember that there are thousands of reviews for the Vortex sparc. Reading through one Vortex sparc review can definitely answer all your questions. The first 4 pages of the keyword itself can lead you to almost majority of the reviews for the product is relatively there making things work for you.

If you check on the several reviews on independent sites, you will also see concerns on the battery life and the dot brightness which is relatively dependent on the user’s preferences and the heavy duty use that is incurred in the device itself. But this issue is a pebble amongst all the positive reviews that the device has been receiving. Orders are pouring in, and there might be issues in the deliveries of the device because of the demand that it has been receiving form the market, it is best if you check on legitimate stores such as amazon and the websites that will give you full refund if not delivered on time.

Strikefire is also a mid-range red dot device made by Vortex. One of the major differences that these two have is the MOA size and the dot itself. Strikefire looks more like a mini scope already that has multiple skeletonized aluminum mounts that can relatively fit a few different mount requirements. One of the main advantages of sparc is the streamlined package that it has. It is relatively smaller than Strikefireand has a more snag free design in it. Though Strikefiregoes a better field views and better scope caps, there is safety written all over Sparc starting from its wired adjustments up to its battery cap itself.

In Sparc, just like what is mentioned in the above statements, have several options in several disadvantage heights. The battery life is also outstanding with Sparc, this is one of the most critical issues that should be considered when you want to invest on the device. There is a quick starter ON for the dot which makes it even more convenient to use as well. Battery life can typically be dependent to that brightness of the device when you are using it. There should also be a protocol in turning off delicate devices, and that is along period of holding the off button in order for the device to turn off properly. It can be held for about 5 seconds before it turns off. It has a compact 2354 batteries that can easily fit in a grip hollow.

There might be questions that might pop out of your head, but almost or majority of the questions might be the comparison of the product to the other products in the market as well. If you are looking for durability, and you might also be the one that take shooting very seriously and want flawless performance all the time regardless of conditions that you cannot even control, this might be just as good as how you use it. We can’t really see why you would not opt for this type of mid-range red dot device for that shooting experience, or in real life applications of the device itself.

Many people out there might be too convinced that it is much better to buy the most expensive one because that would make sure that they have bought the best ones, which is relatively untrue at all. It may not be bargains that they are selling it for, but the cost compared to other competing products is also very competitive.

The ability of the device to hold on to its zero, the battery life and to add to that, it is almost invisible for its shockproof, waterproof and temperature resistant capabilities will definitely make heads turn compared to the other products that are already sold in the market right now. What you see is what you get, and more. This is one sentence that will relatively describe the functionality of the device itself.

All in all, reading through our Vortex Sparc Review and gathering research before making a purchasing decision is a wise move to consider.