Click here to see the Best Air Rifles available in 2017

If you were bitten by the air rifle bug when you first picked up your dads air rifle or you want to get into the air rifle game then you have come to the right place on finding the best air rifle.

Nothing much has changed in the air rifle game since I picked up my dad’s air rifle all those years ago other than the fact that they become much cheaper and much more accurate as well as packing much more power.

When I was younger I was set the task to find my own air rifle by my dad this was to help me learn the ins and outs of air rifles something I am happy he did nearly 25 years later. The task was a daunting one and I suspect it’s much more daunting these days with the extra types of Air rifle Propulsion Methods (powering methods).

Which Air Gun Is Best for You?

There is no such thing as the best air gun. Every gun has its strengths and weaknesses, and it’s up to you to decide what you need. Some of these weapons are perfect for sniping a bird perched on a tree 150 yards away from you. Others are better suited for target shooting in the backyard and just general messing around. There are plenty of different functions that an air-powered weapon can perform, and the best one for you is the one tailored towards your needs. Whether you are looking for a good starter gun for your child or something to keep the pests at bay, there is a gun out there designed for just that.

Once you know what your needs are, the next step in finding the right air rifle or pistol is finding a good balance between your budget and the quality level of your weapon. The more features it has, the higher the cost will climb. If you are willing to stomach those costs, then the weapon of your dream is only a few clicks away, but even those on a tighter budget can still have a gun that they love. They’ll have to make some concessions of course. For instance, they might purchase a spring-powered rifle instead of a PCP one. They will have to pump the rifle several times for each shot, but at least they would have a rifle. The market of air guns is vast, and you’re sure to find a perfect fit for you after perusing useful air rifle reviews.

Here are some of the best air rifles and air pistols you can hope to own. These three air rifle reviews and two air pistol reviews, aren’t arranged in any particular order, and some might make the case that we’re omitting other strong candidates. While it’s impossible to get gun enthusiasts to agree on a top 5 anything, the following five guns are certainly noteworthy. 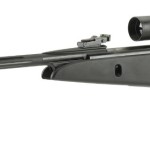 Rated 4.3 out of 5 stars from over 665 customers. Click the image for prices and reviews!

The Whisper is a silent beast. There isn’t exactly anything else like it on the market. Built into the barrel, is a silencing mechanism that reduces noise by over 50%. What’s better is that it can still deliver a punch and send pellets flying through the air at 1,200 FPS. It’s silent and also powerful, which might catch some consumers by surprise. On top of all of that, it’s priced very affordably at $210. Any air rifle reviews you read will all agree that the Whisper is a great weapon to have.

It does have drawbacks though. First of all, it uses a spring mechanism, which many gun owners aren’t too excited about. And they’re also not fans of single-shot rifles. Some also might complain about not being able to remove the silencer on the end of the barrel. All in all, it’s a very popular weapon that would fit well in most arsenals. 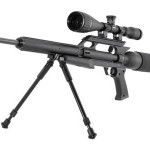 Rated 4.3 out of 5 stars. Click the image for prices and reviews.

AirForce is known for making robust PCP weapons. So far, their most powerful creation has been the Condor. Launching pellets at 1,450 feet per second, it’s one of the highest velocity air guns on the market.

The PCP design makes it easy to shoot. If you’re looking to shoot game from a far, this would be a good rifle to have. It is on the higher end of the price spectrum, as is typical of PCP weapons, but to the right person, the price is worth it.

This revolver won’t be sniping any birds out of trees or winning any long-range shooting contests, but don’t let that turn you off of it. The first in its long list of pros is the low price. For only $50, you can have you’re own, and it doesn’t show.

The power that this thing can deliver and its accuracy and durability are absolutely phenomenal. You would never think that it’s one of the cheapest air guns on the market. This air pistol is hugely popular, and its varmint-slaying abilities are acclaimed. You would be well-served if you bought this pistol. 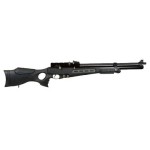 Rated 4.5 out of 5 stars. Click the image for prices and reviews!

Hatsan really delivered with the BT65 SB. Most air rifles are .177 caliber, but Hatsan didn’t think that was enough for this monster. Instead, the BT65 SB launches .25 caliber pellets into the air and somehow manages to still deliver 1,250 FPS. Considering that force is the combination of velocity and mass, those pellets are going to hit hard.

On top of that raw power, the weapon uses a PCP mechanism and can hold 10 pellets, which will make firing it as comfortable and easy as possible. It’s more expensive than some of its counterparts, and it weighs nine pounds. But all air rifle reviews attest that this weapon is of the highest quality, and with that, comes a price.

The Blackbird is very different than the ones in the other four air gun reviews. It’s more like a submachine gun than anything else. It can switch between burst and semi-automatic fire. More astounding than that, it can house 400 BBs. No, that wasn’t a typo. With such large ammo capacity, burst fire, and the CO2, this weapon has the potential to cause devastating damage.

As you might guess, it doesn’t have the greatest range and accuracy, but in close to medium range, it is actually lethal. That’s not an adjective usually ascribed to air guns, but this one certainly deserves it. The Blackbird is best used for fun on watermelons or other targets. Because of the devastation it can cause, it would be too powerful against most pests, but might fit more at home with hunting slightly larger game like javelina. On the other hand, some hunters think there is no such thing as a weapon being too powerful.

There are 4 different types of systems that power an air rifle, these come in 4 different groups Spring-Piston, Gas Ram, Co2 and Pneumatic below we will explain each one as each one have their advantages and disadvantages.

The Spring-Piston has got to be the most common power plant on the market and one that most air rifle owners will have owned at some point. They come in 3 different cocking mechanisms Break Barrel, Under Lever and Side Lever. The biggest advantage of the spring-piston is it reproduces the same power shot after shot it is a really simply power system whereby when you cock the gun you simply compress a spring, once the trigger is realised the spring is shot forward generating high pressure to fire out the pellet. The problem with this system is when the spring is released you can get some recoil so a heavier gun to combat this can help but this is all part of the learning curve in shooting a spring-piston air rifle and very enjoyable once mastered and is all part of the sport.

Don’t like to sound of recoil then a Co2 air rifle could be the answer at a cheaper price. The Co2 is what generates the power to fire the pellet the Co2 is stored in bottles that is screwed into the air rifle and will need replacing the bottles are at relatively cheap. A co2 air rifle is recoilless and generally lightweight and purchased by beginners who are looking for a fun air rifle for target shooting and younger shooters who struggle with the weight of a spring-piston. The main disadvantage is how sensitive they are to temperature and can cause inconsistent accuracy in extreme heat and extreme cold weather. The Co2 air rifle can come in multi shot format so are ideal for plinking.

The pre-pneumatic or as then more widely know as PCP’s is a high power, accurate system that has made huge advances over the last 10 years. There is a reservoir within the air rifle that is filled using a stirrup pump giving a highly pressured chamber that can fire the pellet to levels between 1500 to 3500 psi some go higher. As this is a very powerful system it is the air rifle of choice if you want to hunt large game they make a perfect air rifle for someone that wants a recoilless air rifle for easy accurate shooting.

The Pump-up air rifle works in a very similar way as the pre-pneumatic but were they differ is as the name suggest you pump the air rifle by a lever filling the air chamber the amount of times you pump 1-10 can vary between makes and models and the more you pump the more power the air rifle will produce. These are generally just as accurate as the pre-pneumatic and recoilless making them a great air rifle but are generally only a one shot so pumping between shots can become annoying but if you are just target shooting they can be good to go with one pump and your ready to shoot and they are cheaper than the pre-pneumatic making them a great entry level pneumatic air rifle.

If you are new to buying an air rifle then the caliber is the internal diameter of the rifles barrel witch determines the size of pellet you can use. There are 3 main caliber selections to choose from .177, .22 and .25 each one having its advantages and disadvantages we will take a look at each one to see what best suits your needs.

This is the most popular caliber on the market and is a highly accurate pellet at longer distances the .177 is ideal for target shooting and plinking but can take out small pests (squirrels, birds, rats) so a bit of an all-rounder. With the .177 being so popular they are the easiest pellets to obtain and generally much cheaper.

A pellet with a larger weight and size over the .177 giving it much more knock down power so making it ideal for people looking at hunting larger pests (rabbits, wild woodchucks). They are good for general shooting but the pellets cost more than the .177.

The largest pellet of the common 3 caliber’s so lending itself for hunter lager pests (coyotes) they are much harder to shoot at longer range but ideal around 50 yards or less.

I have hopefully helped you understand a little more about air rifles it’s now up to you to pick what air rifle best meets your needs, is in your price range, and overall help you in your shooting adventures. The air rifle comparison guides should help make finding one that much easier and with new air rifles being added to the market all the time the air rifle comparison guides will be constantly updated. If you feel we have missed an air rifle that should be in the list then let us know.

Click here to see the Best Air Rifles available in 2017