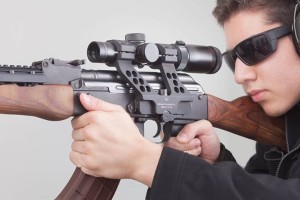 Many scopes nowadays run on high magnification, with many hunters able to do short to long range shots at 3x to 9x power. With that said, like the World War II era 1x to 4x, there’s also a place for scopes that range from 1x to 6x in modern times. The best 1-6x scope is roughly the same as the best 1x to 4x scope in that they should be perfect for short-range shooting that’s better than iron sights, especially when fitting them into an AR 15 rifle.

You’re also given the advantage of a magnified target that’s easier to shoot for ranges of 300 meters and below with a 1x to 6x scope that’s slightly better than what you can get from a 1x to 4x because of the extra magnification ranges of 5x and 6x. This low-powered scope allows you to have a less complicated aiming at near targets that you’d normally have to line up from the iron sights near your hammer to the iron sights on the nose of your rifle. It’s all for the sake of short-range optics.

What Are the 1-6x Power Scopes Should You Pay Attention To?

The main claim to fame of Primary Arms 1-6X Scope with Patented ACSS Reticle is its special ACSS crosshairs that have great BDC (bullet drop calibration) and built-in flip-up lens caps for better overall precision. You can always rely on Primary Arms.

After all, acquiring good precision is all about knowing how to adjust to outside forces. Ergo, this scope offers all sorts of MOA, windage, elevation, and illumination adjustments so that you can always make the best shot possible at any circumstance within the 1x to 6x range.

This is what makes Primary Arms one of the best 1-6x scopes you can buy. It has an illuminated reticle, rangefinder, and multi-coated optics to ensure maximum light transmission or brightness. What more can you honestly ask for with this scope?

This high-end riflescope for AR 15 usage is part of the Elite Tactical brand, which means you can expect true 1x magnification (higher magnification scopes can’t seem to nail that) and a durable, rugged product that can take the elements.

As far as the modern, 2015 standards for scopes go, it passes with flying colors. It’s shockproof, waterproof, and fogproof due to argon-purged, O-ring-sealed tubing. That’s the Bushnell Elite Tactical scope’s main claim to fame as well as its ticket to becoming at top pick among the best 1-6x power scopes available.

This low profile but not low quality optical assistant (with low profile turrets to match) has a great price and a 1x to 6x power scope that won’t break the bank or won’t break easily because it’s so affordable. Usually with scopes, it’s either one or the other, but wonderfully, Vector Optics is both at the same time.

The Vector Optics Tactical Compact 1-6x24IR Riflescope Low Profile Turrets GrimlockSCOC-13 has many of the specs of topnotch specs in this review, but you can get this one without paying $1,000 or $260 or even $170. It’s all available to you at click for price, which is indeed a steal no matter how you look at it.

It has all the relevant, in-demand features of big name scopes but isn’t as excessive as they are with the more peripheral benefits, thus you get the most out of your investment with Vector Optics.

You can go back to basics with BSA because it provides you with intuitive, user-friendly features such as am EZ Hunter Reticle, easy shifting from one magnification to another, and the like.

It also features a tough exterior that even amateurs will find hard to damage and standard scope features such as being fogproof, waterproof, and shockproof all at the same time.

You can weigh and measure the BSA Gold Star 1-6 x 20mm (6X Zoom) Rifle Scope with EZ Hunter Reticle, and you definitely won’t find it wanting because of its fully coated optics, illuminated reticle, maximum light transmission, and more bang for your buck when everything is said and done. It’s not cheaper than the Vector Optics Grimlock, but it’s in many ways better.

The only real unusual thing about this list is how at Amazon.com, Bushnell costs five to ten times more than the rest of the scopes in the review. Other than that, from across the board, the scopes all feature roughly the same specs. They all attempt to make up for the below-average 1x to 6x magnification power (in Bushnell’s case, it’s 6.5x) with all the requisite modern day scope bells, whistles, and trimmings.

For example, these scopes feature or argon purging to make the scopes fogproof, shock-absorbent construction, and 20-24 millimeter objective lens diameters. Regardless, these low-powered, close-range lenses are perfect for competitive shooting, up-close hunting, target practice, and hunting down people who also have guns if you’re part of the police or military. Indeed, there’s still a place for the 1x to 6x range of scopes in the modern world.