Click here for the Best Scope with Red Dot on Top available in 2019! 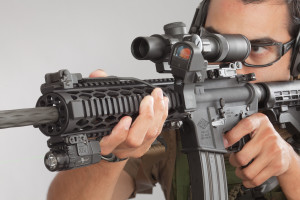 The limitation of a typical optic is that it is designed in such a way that it can serve only one purpose and fails while doing something else. If the optic is designed for long range it won’t be a good choice for close range shooting and vice-versa. In that case, what should be the obvious choice?

In order to deal with this the problem, modern optic technology is making the close range optics in a smaller size and thus combining with the long range optic which works excellently and more efficiently. The combination optics (scopes with red dots on top) is epic and versatile in nature thus, it is becoming more and more popular day-by-day. They are also affordable compared to other optics. Here are the best scopes with red dots on top are as follows:

The Trinity Force is a great option if you are looking to outfit a basic carbine like the AK 47 or a carbine variant of the AR 15. This is a low profile and lightweight optic that has a range from one to four magnifications. The Trinity Force has a slim 28mm objective lens which is used to keep the scope low and slim. The optic of the scope is made from aircraft grade aluminum and specially designed as for the optic that comes with one cantilever scope mount.

The Trinity Force facilitates quick release system in a stabilized way that is locked down tightly by two throw levers. It doubles down with quick adjust locking turrets that offer fingertip adjustments and ½ MOA adjustments. Thus, the turrets may lock down tight to avoid the unnecessary and unwanted adjustments. On the other hand, the reticle is etched to optic’s glass.

The range of magnification offered by the scope is very suitable for close range shooting though in case of indoor shooting it will be difficult for any standard tube optic. Behind the top adjustment turret, a small, lightweight, miniature and dot is mounted on the top. The miniature red dot is used for bad breath distance encounters and for doing ‘social’ work.

The Trinity force 1-4 x 28 scope is featured with an excellent optic that works best as a self-defense rifle and covers most bases for the city and rural people. The scope is also a good tool for fast and dynamic shooting while competing with others, like three gun competitions. Such exception and versatility of a scope is really hard to find and it’s really an unparalleled one making it one of the best scopes with a red dot on top.

Best Scopes with Red Dots on Top are certainly the ones with greatest features! One of the best examples of such a scope is the Vortex SPR – 1303 Spitfire. This is a robust optic that provides best possible features at a very reasonable pricing of below $300. It is specially designed for the AR platforms and includes an impressive array of high-performance features in the light-weight and ultra-compact package. The battery is also very reliable and stands up to 250 hours providing maximum brightness and 3000 hours at minimum brightness setting.

The brightness intensity of five levels allows both red and green illumination settings and the auto shut down mode helps to save the battery life. More precise and compact optical system is found by the sophisticated prism-based design without sacrificing the optical quality. The lens used in the scope is multi-coated and waterproof that saves the lens from moisture, dust, and debris.

The Vortex SPR – 1303 Spitfire works clearly in all light levels and with this unit rapid shooting is possible with both eyes because it is parallax free. However, some people face problems while using the red dot on top scope because of the placement of screws for the base and riser. Also, the eye relief is expected to be better.  Overall, this is an excellent optic which doesn’t require any qualifier.

The Trijicon ACOG outnumbers any other optic in case of overall strength and durability. The riflescope was adopted by the United States Marine Corps and was so perfect that it led to a noticeable change in headshots. It happened so often that a Congressional investigation was launched for this. The ACOG has fixed value of magnification which is 4 and comes with a 32mm objective lens. It also features a bullet drop compensator specially designed to use with the 5.56 rounds.

The Trijicon ACOG is made of incredibly strong and very lightweight forged aluminum. The illuminated reticle of ACOG is a battery-free design and it can absorb light from the area around it with high precision.

The Trijicon has mounted a rugged miniature red dot optic on top of the scope which is as tough as the ACOG! The RMR features a 3.25 MOA red dot as the reticle and it’s frequently used for close range shooting of objects. The precise combination of the red dot holographic optic and the fixed 4 power optic make the ACOG the best choice for both the close quarters battle and medium range engagements. If you can afford its price then it will certainly be the best scope with a red dot on top.

The size of the reticle of this scope is 1.8 MOA red dot measured using a prism. The body is made of aluminum and includes a built-in quick release mount for Picatinny rails. The Meprolight Tru-Dot uses single AA battery from the front side of the sight. The optic has no controls except for the zero adjustments and it’s done by using flush-mounted dials that can be turned with a cartridge case rim. It features extremely bright and clean images of the target because of the parallax free lens and provides an unlimited field of view when used with both eyes open. It includes four brightness settings.

The Meprolight Tru-Dot is nicely finished with black anodizing and one of the best scopes with a red dot on the top for the law enforcement agencies on tight budgets and personal ownership.

The NcStar MK 3 is an ACOG style optic designed for using both at medium and close ranges. The optic has 3-9 magnification power which is rare to find in such a small, lightweight and compact optic. It comes with a 42mm wide objective lens which is perfect for a number of carbines. The MK 3 can be mounted on any standard Picatinny rail just like an AR 15 flattop carbine.

The NcStar MK 3 has fully multi-coated lens for maximum light transmission at any condition of the atmosphere. The turrets are fingertip adjustable and made open target style. It features a built-in sunshade which reduces the luminescence. The placing of rounds for longer ranges is made easy and quickly by the built-in drop compensator which can be used with the 55-grain .223 rounds. The MK 3 has quick release lever which are easy to attach and detach. The reticles have different brightness settings and you can shift the illuminated reticle from red to green upon swapping. These reticles are exceptionally bright and long lasting.

The Leapers LED Sniper is a piece of glass which is interesting. This riflescope is made for using at longer ranges and is very handy for bolt action rifles. The LED Sniper has a magnification of 6 to 24 which is a pretty wide range and also features a 50mm wide objective lens. The power level is ideal for the hunters at medium to long range and it’s perfect for hunting over open spaces and down roads. The LED sniper is very useful for long range shooting, but such optics are difficult to use for objects which are at close ranges.

This is the perfect riflescope where red dot on top of it comes into play. The reticles have four different settings and can be used for close quarters and rapid fire shooting. For the low light shooting, this optic features the laser aiming device and the laser includes pressure switch for instant-on access.

The Leapers LED Sniper has the fully multi-coated lens and fingertip adjustment options. The coating is used to reduce the glare and reflection and thus the lens provides very clear and sharp quality pictures with great light transmission through its 50mm wide lens. The scope is very precise and easy to adjust within a short time. It made by the combination of both long range optic and close range holographic red dots which give various options at different ranges. All the features make the LEO Sniper a good choice for the scope with a red dot on top.

Dot vs. Magnification: Which is best?

There is always confusion between dot and magnification scope while choosing for the best one. Small dot sights are very common in the case of rifles like AR-15 because it’s a versatile weapon. The dot aids quick and more precise target aiming than the iron magnification scope. The dot scopes are cheaper than the iron scopes which is also a good side about them. Additionally, the dot scopes had a lighter construction which makes it handier. The selection of scope for your gun will depend on the type of that gun and the purpose it serves.

When a magnified scope is combined with a close range, the holographic red dot increases the ability of both the user and the rifle.

Combining the optics is an amazing thing because it let the user of the rifle use it from close quarter’s battle to counter sniper missions. Such optics can be used in both defensive and dynamic competition utilizing various engagement potentials. So, be careful before choosing the best red dot on top of scope product and give the utmost importance on the use and gun type while buying.

Click here for the Best Scope with Red Dot on Top available in 2019!

I'm an avid hunter and I've been doing it for over 25 years. I mainly hunt in Northern Minnesota and Arkansas during the summer. Thanks for reading my blog! I hope you enjoy my Hunting Gear Reviews, guides and blog posts!