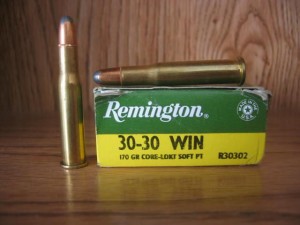 If you’re getting long in the tooth like me, chances are your first deer gun was chambered in 30-30 Winchester. Chances are also good that the Winchester 30-30 you had was either a Winchester Model 94 or a Marlin 336 (or one of the many knockoffs).

It’s been said that the 30-30 Winchester has killed more Deer than any other cartridge. I’d have to agree with that statement. Even today, I’m betting more Deer fall every Deer season to this 103 year old round than any other.

History of the Winchester 30-30

The 30-30 Winchester started life as the 30 WCF in 1895. Shortly after, Marlin chambered the round in its lever action rifle but didn’t want the name “Winchester” on its rifles, so they called it the 30-30. The name stuck.

It was first chambered in the Winchester model 1894.

The 30-30 was the first small bore centerfire round to use smokeless powder. History tells us some guy named Teddy Roosevelt was an avid hunter and owned one of the first 30-30’s to come out of the factory.

Teddy use the “thutty thutty” to down an Antelope buck at 220 yards with a 160 grain bullet.

Isn’t it ironic that Teddy and the people of that day considered the 30-30 Winchester a flat shooting rifle? I guess compared to a 45-75 with black powder, it would be! (Teddy’s favorite ‘American’ rifle was a Winchester 1876 chambered for the 45-75) 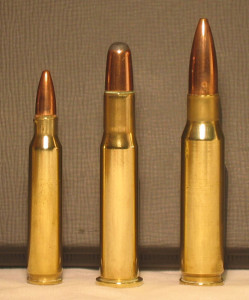 Why has the 30-30 become the most popular round in America? In my opinion, there are a few reasons.

For one thing, the rifles that are chambered for the 30-30 are inexpensive when compared to other rifles chambered for other rounds. It’s not uncommon to find a Model 94 Winchester or Marlin 336 in good shape at a Pawn Shop for under $200. These guns are capable of producing acceptable accuracy for deer hunting out to 100 yards or more with a little practice.

My longest shot with a 30-30 was right at 150 yards and I’ve know a couple others who taken deer past that range. Not that this would be my first choice for those ranges, nearly all the deer I’ve killed with the 30-30 have been under 100 yards, but in the right hands, it can be an effective round.

Ammo for the 30-30 is generally a few bucks (no pun intended) cheaper than other ammo as well.

The light recoil of rifles chambered for the 30-30 Winchester make them desirable for new Hunters, Women and those who only shoot a rifle a few times a year not to mention those Hunters that are sensitive to recoil.
Finally, the round itself is a solid round. I think it’s safe to say the 30-30 Winchester has probably taken everything that walks North America.

For my money, I love the feel and handling of the Marlin 336’s. My Dad actually bought a Glennfield Model 30A (basically the same as a Marlin 336 but with a shortened magazine) in 1967 to hunt Mule Deer in New Mexico around Chalma. The pictures that he and my Uncle have of the Mulies they killed out there make me drool even today. I’m in most of those pictures, a little two year old cowboy sitting on his knee beaming as if I’d shot those bucks myself! You’ll see the Glennfield in those pictures as well.

Today, I own that same rifle. It was the rifle I took my first deer with, a Doe that field dressed 94 lbs. Since then, I’ve put more than a few deer on the ground with that rifle. Most with open sights. It has only been the last 5 years or so that I mounted a scope on it. The scope does take away some of the rifles quick handling, but it more than makes up for it in improved accuracy.

I have a confession to make about the Model 94 Winchester Rifle. I don’t particularly care for them! I much prefer the Marlins over the 94.

My experience with the Model 94 is limited. I’ve only owned two of the rifles and found both lacking for my needs.

For starters, you couldn’t put a scope over the receiver on older Models and the new ones still need the see through mounts to function properly.

Second, I hated the straight stock. It’s not nearly as comfortable in my hands as the pistol gripped Marlin.

Next, I hated those freakin’ buckhorn sights!

Last but not least, I hated the way the action opens up at the top. There were times when I’ve be in the tree stand and it would be raining and I’d see drops dripping down on top of the receiver. It used to drive me nuts! I’d then be twisting and turning trying to keep that rifle from getting water in the receiver.

I doubt it would have affected the performance of the rifle, but it drove me crazy thinking about it. All I had to do with the Marlins were turn it right side down on my lap and I didn’t have to worry about water getting into the receiver. At least, not where I could see it.

The great gun writer Sam Fadala actually has an entire book on the Winchester Model 94 and the 30-30 Winchester. I recommend anyone thinking about buying a rifle to read it. It’s called Winchester’s 30-30: Model 94, The Rifle America Loves

Is the 30-30 Winchester Adequate for Deer?

Well, millions of dead Deer are proof that the 30-30 is more than adequate for any Deer that walks this planet.

The 150 and 170 Grain bullets carry enough punch to do a Deer in at ranges out to around 200 yards. But generally accuracy suffers from most lever action rifles when shooting that far. But there’s good news for us Lever Action hunters. It’s called Hornady LeveRevolution ammo and it’s going to change the way a lot of us lever action folks hunt deer!

Speaking of the new Hornady Leverevolution ammo, this ammo is simply awesome. This has made my old Glennfield 30-30 into a 200 yard plus deer rifle. Not only are they accurate out to 200 yards plus, they hit like a freight train. On our Special Antlerless day several years ago, I took a large Doe at 188 steps. At the shot, she took off and ran 20 yards and did a cartwheel and it was over that quick!

For those of you who haven’t heard about the LeveRevolution, they are a polymer spire pointed bullet designed to be used in tubular magazines. The tip is soft and collapses. Hornady and a few Gun Writers have been reporting exceptional accuracy out to 250 yards with these new rounds, but I haven’t shot my old 30-30 out that far yet.

I would never classify the Thutty-Thutty as an Elk or Grizzly Bear round, but they have fallen to the 30-30. I’ve read stories about some Black Bear guides in Canada who prefer the 30-30 over a shotgun because of the quick handling characteristics and short range stopping energy of the 170 grain bullet.

Hunters using the Winchester 30-30 have several choices when it comes to ammo.

Remington offers the 125 grain Accelerator and most ammo manufacturers offer both the 150 and 170 grain factory loads. Until I started using the Hornady LeveRevolution ammo, I’d always preferred the Remington 30-30 170 grain bullets over the 150 grain ones. I experimented with both early on and found the 170 grain bullets to be more accurate plus they hit with a lot more kinetic energy than the 150 grain bullets. This means deeper penetration and more knock down power.

For several years, I used the Remington 170 grain hollow points. These were deadly Deer takers! I stopped using them when I shot a large 8 point at about 80 yards. I later found the fragmented bullet on the far front leg, a few inches above the “elbow”, where it had broken the bone. I wasn’t crazy about finding pieces of my bullet even if it had went through the buck and busted his leg on the far side. I went back to the 170 grain soft nosed bullets.

Many so called “Professional Gun Writers” over the years have put down the little Thutty Thutty, saying things like it wasn’t adequate out past 75 yards, that it wasn’t accurate enough for deer hunting, etc. It was obvious that they had never shot a 30-30 or had just borrowed one in order to write an article.

I have a theory of why blunt tipped bullets in rounds like the 30-30 Winchester kill deer better than what many Gun Writers would like.

I believe that a blunt tipped bullet, be it a round nose or flat nose, delivers more of its kinetic energy upon impact than spire tipped bullets. Even the poly tipped bullets have to penetrate a certain depth before the start expanding and delivering their load of kinetic energy. Truth be known, many of spire pointed bullets use up the majority of their kinetic energy in the dirt on the other side of the animal.

Whether you contemplating buying a rifle for a first time hunter, or buying a rifle for yourself, don’t count out theWinchester 30-30 and the Rifles it is chambered for. They’re perfect for the first time hunter or the Old Fart who just wants a lighter hunting rifle. Put a quality scope on the top of the rifle and you’ll have a life long rifle that will bring home the Venison if the shooter does their job!