Little blast from the past to keep some turkey tales on the table during the long off season. Sometimes I wish we had a fall season here.

Just wanted to take a few minutes and share the hunt from Friday morning with y’all . We started out on the same property we hunted earlier in the week where we have been experiencing some super gobbling action. This morning was different, I had not been able to raise a single gobble off the roost Thursday eve and the gobbling Friday morning was in line. After hearing zero volunteer gobbles I finally resorted to the widow maker. 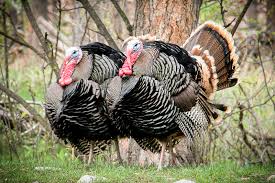 I ran a series of fast yelps with some cutts thrown in and heard two weak gobbles about 300 yards from us. One more good ear smash and I was able to get one more gobble distinctly left of the first two and muffled by the fact the bird was now on the ground. We were to hear no more gobbles for the entire day! However that one observation of direction of travel ended up being a major key to killing the tom an hour later. Given the direction the bird flew down I figured he had but one place to go and open food plot 400-500 yards from his present position on an adjacent tract we have. Decision time, pack up lets get over there.
We arrive fifteen minutes later at the food plot after traveling by way of road and set up some dekes. Having little to go on other than my hunch of travel direction and previous sightings of a strutting tom in this spot I started out with some soft calling and quickly broke into the widow maker again. Nice thing about these long boxes with high volume is they can get the word out to a large area that your there and waiting. After that one run I broke out the pure death and cut way back to soft feeding yelps and clucks.

30 minutes went by and as has happened several times before I caught a glimpse of white head and tail fan coming from the left. There they were two longbeards one strutter one scout moving in quickly to the dekes. Right on cue the strutter stopped 20 yards in front of my position throwing out a spit drum and giving me a look straight on. What a great site! Like he knew he had business a little further down the plot he strutted to 15 yards in front of Oliver , my hunter.

Oliver did a fantastic job of staying still and being patient. I could see he was waiting on the opportunity to double and from my angle it was coming. Unfortunately from his angle he had an obstruction in front of the barrel and it wasn’t a clean shot. After that brief window of opportunity the scout tom decided this set up was fishy and began walking away , now or never. Still in a strut at 15 yards the bigger tom stared straight into the woods right down the barrel. After what had to be a great sight and a few more drums he popped his head up taking notice of the other birds worry and Oliver rolled him over backwards. He would have made a shot on the second but he took straight to the wing and he passed the shot.

Got to say I was highly impressed with this mans cool head under pressure, he made all the right decisions and came out with a nice longbeard, instead of a tainted story. One thing I’ve learned over the years is even experienced turkey men can crumble into bad decisions when face to face with a tom in full strut, Oliver rose to the challenge nicely.

Birds stats were a little slight at 14 lbs 10.5 inch beard and 1 inch spurs . Oddly he was missing all of the last joint and claws on his left foot and only had the middle toe intact on the right. It didn’t appear to be a healed wound but a birth defect. I cant help but wonder how a tom so obviously at a disadvantage in weight and claws during a fight could hold the position of lead strutter but he sure did.

The thing that was the best about the whole deal for me was this, On a cold gobbling morning a little audio observation and previous scouting made the hunt. I was very satisfied with the hunt and quietly proud that on this day I was able to pull out the right answers to what could have been a super dull morning in the spring turkey woods.