Should You Shoot Small Bucks? 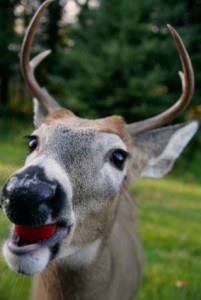 You know, I never took this questions very serious until recently. Over the past few years, I’ve seen this question start some real knock down and drag out debates (okay, arguments!) in online deer hunting forums. But I’ve been seeing more and more of them lately whenever someone asks if they should be shooting small bucks or not. And I mean some of these folks probably would be going toe to toe if they were in front of each other (or sucking up to one another…lol). But in my opinion, it’s a ridiculous argument to say the least. Here why I think like this.

First and foremost, I think the decision to shoot a small buck, or any deer for that matter, should be left up to the individual hunter as long as the deer is legal (* with an exception as stated below). Whether you agree with the game laws or not. But if a spike buck with 3 1/2 inches of hard antler above the hairline is legal in your state and you want to put a tag on him and take him home, you should have that right if you purchased a deer tag or hunting license.

*And since I mentioned the law, I think having laws restricting hunters to harvesting deer with a minimum antler count is plain wrong. Arkansas comes to mind with its 3 point rule (or is it 4 points per side?). Whatever it is, I believe it’s wrong. A hunter should be able to put their tag on any buck they can see the antler on. These types of laws also rob our young and elderly hunters of chances of enjoying the harvest of a buck deer. Which may be the greatest tragedy of all.

The State and other Hunters should not be the ones making the rules telling me whether or not I can shoot a buck with hard antler above the hairline. There have been years where I went home empty handed and happy because I was chasing a few select Trophy bucks. There have been other years when I killed 4 or 5 deer and everyone was a 6 point or less. I was a happy camper both times.

It’s the individual hunters enjoyment that spells success. If that means taking a Spike buck, so be it. If that means putting 20 hours a week in going after a Trophy buck only to go home at the end of the season empty handed, so bit it. It’s the Hunters choice and that’s the way it should be.

I once knew a fairly famous bowhunter in our State who also owned an Archer shop. They guy was always nice to me even when I was a wet behind the ears teenager in his store only spending a few bucks. He was what I considered your average archery owner. Pics of his trophy’s all over the place. Which I’m totally fine with.

But one year he’d went most of the year without killing a deer. Even went through the rut and rifle season without killing a buck. Then toward Christmas he shot a small buck with 2 points on one side and 3 points on the other. Nothing real special as far as the head gear went. But this guy’s story was he shot the deer because the side with 3 points was rare and he’d never killed a buck like this.

Personally, I thought a little less of him after that. I didn’t get the feeling he was being totally honest with anyone. I did get the feeling he killed it because it was getting near the end of the deer hunting season and he wanted to shoot a buck. Which I’ve done the same thing and I believe it’s certainly within the rights of a deer hunter to do so. But be honest about the reason you put a tag on a deer! Heck, there should be no shame saying the season is coming to an end and you wanted to put a tag on a deer!

Okay, another rant here. You guys who go around saying “you can’t eat horns” are correct. But don’t spout that crap off then when you get a wall hanger in front of you blast the crap out of him. Then proceed to tell everyone what a trophy he is. There’s no shame in saying you’re a meat hunter or that you wanted to shoot the first thing that comes by. I know a lot of hunters who wished they could kill a buck, any buck, each and every year like some of you do. Be proud of the fact that you’re good enough to kill any deer consistently!

I’d also like to call out the guys who hunt high dollar leases or go on nothing but guided hunts and then look down your nose at people who kill small to average bucks. I’ve often said, and still stand behind this statement, that anyone who can kill a legal buck on Public Land consistently is a far better deer hunter than someone who only hunts exclusive leases or pays to hire a guide. Just because you have the money to hire a guide our lease up half a county in Illinois does not make you a better hunter!

Finally, no one should have the right to tell me, or you, which buck I can shoot. Study after Study have shown that taking spike bucks does not affect the quality of the deer heard. No one should have to ask if it’s wrong to shoot a small buck!