Going into this Season, many of my friends thought it would be a tough hunt. The Full Moon was on Oct. 26th. As if that wasn’t bad enough, there was an historic bumper crop of Red Oak acorns due to a wet Summer. I’ve never seen so many acorns in our hunting area!

Added to this was the fact that earlier in the Summer the river that flows through our hunting area came out of its banks and stayed out for more than a week. This pushed all of the Deer out of the area. Our bottomland hunting area was under 5 to 6 feet of water during that time. There were still strings hanging from many of the trees in the area where local fishermen had put out limb lines!

The scouting cameras weren’t showing any Deer to speak of. The corn under the feeders was piling up. Even the Squirrels and Crows preferred the acorns! In one weeks time, the most popular scouting camera they had out only showed a small buck. No Does or Other bucks were seen. This wasn’t looking good.

But we persevered. No use in staying home. We scouted hard and relied on previous experiences to try and make the Primitive Firearms Deer Season a successful one.

Opening day dawned a little chilly with lows in the upper 40’s to low 50’s. As I sat in the stand that morning, the Moon was overhead. Weird. Just Weird.

Nothing seemed to move that morning. At least around my stand. But that was okay. This was my first morning of Deer hunting and I enjoyed watching the World in my neck of the woods come alive. I simply love to get to my stand before daylight and watch the surrounding area wake up as the sun comes up.

I sat in my stand until approximately 10 O’Clock. My skimpy breakfast was taking a toll on me. So I got down and did some scouting on the way back to the pickup.

That afternoon wasn’t any better. I sat in a travel corridor that showed some recent sign, but the Deer just didn’t filter through the area that evening. 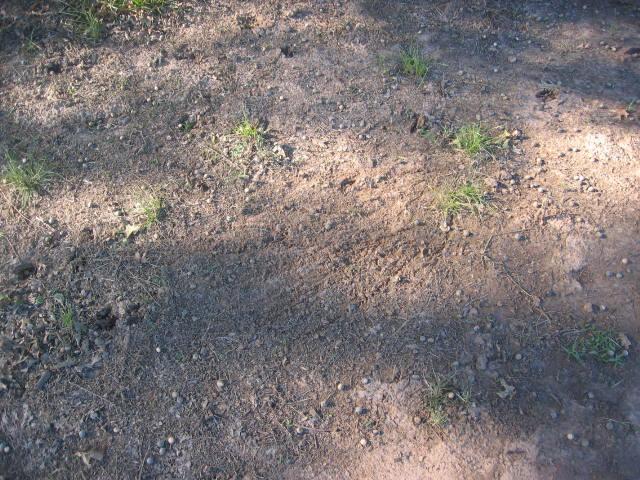 One nice surprise I found was a half hearted attempt at a Buck to make a scrape. This told me that the Full Moon had started triggering the Rut because I had walked past that tree the previous day and the scrape wasn’t there.

Notice all the acorns laying around the scrape. Every Red Oak tree in the area was covering the ground with acorns!

Time To Make Something Happen

I only had 4 days to hunt the blackpowder season. It was clear that the Deer were bedding in the areas where they were feeding. This makes hunting tough. Deer literally can get up out of their beds, take a few steps and fill up on acorns then bed back down. Something had to give, I was running out of time, and it was only the 2nd day.

I figured there had to be at least one Buck in that nasty area. I would wait on them to funnel down the creek. I set up on a small point of land that was a little higher than the surrounding area. There was a fallen Hickory on this point of land. I used its branches to take cover in.

Once I got set up, I looked up and again saw the Full Moon. I snapped this photo from my hiding spot. 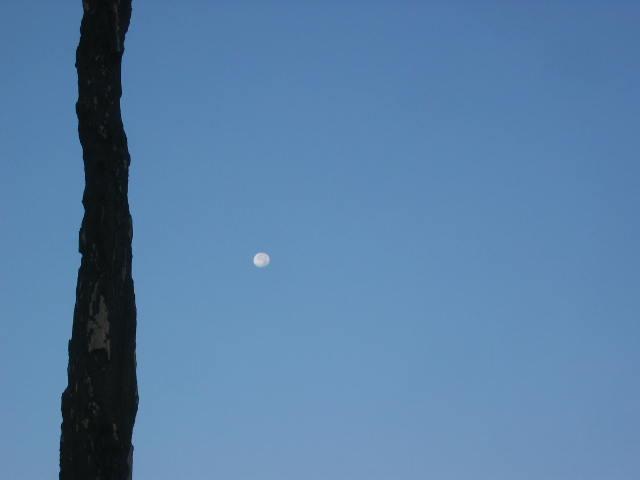 At around 9 a.m., I had yet to see a Deer. I was getting frustrated to say the least!

I figured that the Full Moon would have set the stage for some of the older Bucks to start coming into the first stages of the Rut.

So I eased out my grunt tube and gave a short series of tending grunts. A few minutes later I followed that with more tending grunts then I put down my grunt call.

I believe Hunters grunt way too often. They are so absorbed by grunting they fail to see the Buck sneaking in or the spook the Buck by grunting too often and too loud. I’d go as far as to say that the majority of Deer Hunters have never heard a Buck grunt in the woods. Bucks don’t go around grunting everywhere they go!

About 9:30, an 8 pt. jumped the fence in front of me (about 70 yards away) and stood there looking around. This is a prime example of a Buck taking a very long time to come into a grunt call. It had been 30 minutes since I made the last call but this Buck was definitely looking for the source of the grunts! I might also ad he came in silently. I’ve had some Bucks come in on a dead run, running over everything in their way. But far more sneak in like this ole boy did!

The deer was looking right at my hiding spot. I put the crosshairs on him and dropped the hammer. As one of my favorite TV personalities, Roger Raglin, says, “He got aquainted with the ground real fast.”

Although no giant, the 4×3 with one sticker was a respectable buck for the area. I was certainly happy with him, especially under the circumstances!

Oh But Wait, I Can Also Take An Anterless Deer!

I still had an Antlerless tag to fill. Sunday afternoon found me watching a grove of Persimmon trees on a section of land a little ways from the Bottomlands. This ground was higher than the Bottoms and I figured some of the local deer were still hanging around.

The Persimmons weren’t quite ripe yet, although Possums had knocked a few down. 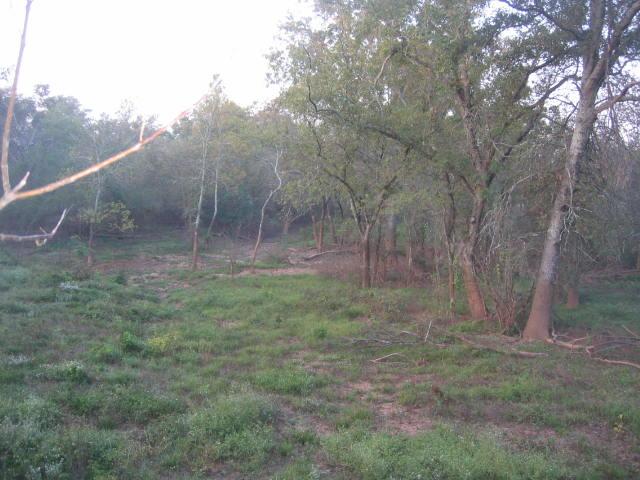 I didn’t see any deer that evening.

The next morning found me back in the Bottoms in a stand next to the River. This stand overlooked an old clearing that was once a food plot. However, since it’s hard to reach with equipment, it hasn’t been planted in two years. Still, I figured the clearing would provide the Deer with easy picking of the acorns on the semi bare soil. Deer would much prefer to pick a bunch of acorns off bare soil that hunt for them in the leaves and underbrush. This clearing had some big Red Oaks and I was hoping some hungry Does would visit me this morning! (notice the water marks on the trees)

The morning was uneventful for the most part. I watched some Canadian Geese fly overhead and listened to some Wood Ducks whistling through the woods. A few Squirrels moved around my stand giving a Herculean effort at burying every acorn they found. This was encouraging because in other areas, I had seen no Squirrels at all. It seems like the flood had moved them out of the Bottoms as well.

About 10:30 I heard a commotion to my left about 100 yards away. Call it instinct or experience, but somehow I knew it would be Deer. I was picking up my MDM Buckwacka Muzzleloader when a Doe appeared trotting down the fence. No use in seeing what else was behind her, I needed a Doe to tag out and she was it.

I put the crosshairs on her and whistled for her to stop. On cue, she stopped and looked around just as I squeezed the trigger. What little smoke there was from the Pyrodex pellets hid her from my view. When the smoke cleared, I half way expected to see her down, but she wasn’t.

About 20 seconds later these two Spike Bucks come in right behind her. One was probably a 1 1/2 year old Buck while the other one was probably this years Spike.

About the same time I saw the Spikes, I heard the Doe crash. The larger of the Spike Bucks was behind her a ways trotting in the same direction. Apparently he either saw her go down or smelled the blood and took off to the South like he’d been shot out of a canon! The smaller Spike was a little confused as to what was going on and he jumped the fence and came into my clearing. He walked back and forth several times trying to decide which way to go.

I eased out my Canon S410 and decided to take some pictures of the little Guy. 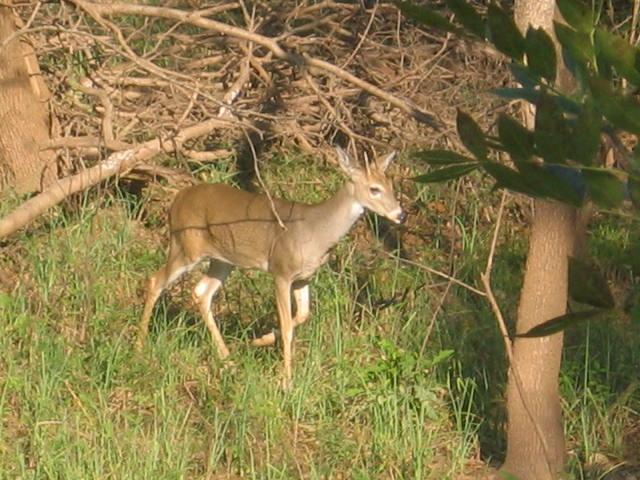 Finally, he decided he’d go up the River and walked within 20 yards of my Treestand.

These deer had never shown up on the scouting cameras so I have to assume they were new Deer trickling back into the Bottoms.

After the Spike had been out of sight for about 10 minutes, I climbed down to go see the Doe.

She had run about 50 yards and crashed near the fence. Ironically, she died about 25 yards from where my friends 4 point had piled up the evening before.

She was a young Deer and made an excellent addition to my freezer!

Since the weather was in the high 60’s to the low 70’s during the warmest part of the day, I didn’t want to let either Deer hang. We jerked the hides off (we process our own Deer), quartered them up and stuck them in my friends freezer after I had chilled the meat with ice water. (never put warm meat in a freezer! The outside will start to freeze while the meat next to the bone will remain warm and can actually start to spoil before it cools down enough)

I came back a day early because I knew it would take some time to put the meat up. I’m very picky about my Venison and I spend a long time cutting and pulling all the membrane off before vacuum packaging it.

Later on in the Week, the Full Moon was waning and things seemed to be back to normal.

My buddy Frank was sitting in the same Stand I took my Doe from on the next to last day of the Season. About 5 p.m. he got a surprise as this 10 pointer (with 2 stickers) showed up about 25 yards away. Needless to say, he was very excited after the shot. In fact, he had to call his Brother to come and help him out of his stand! This is Frank’s best Deer to date.

We believe this Buck is one that was caught on Scouting Cameras in the Summer of 2005. He has very distinctive head gear, including ends of his main beam that point downward.

This Buck field dressed at 160 lbs. A big bodied Buck for the area!

Lessons To Learn From The Oklahoma Blackpowder Deer Season

Here are a few tips I hoped you picked up in this review. These tips can help you if you’re facing similar situations.

All in all, the Oklahoma Primitive Firearms Deer Season was the best one we’ve every had in terms of killing Deer. I hope the Modern Gun Season turns out just as good!