I have that “Erie” feeling again!

WHOA!…..now THAT’S a good fish I thought as my rod doubled over. “Looks like you could use a little help” chuckled my friend and Great Lakes guide Nolan Edward’s. “Think you can handle that big girl all by yourself”? With a grin on my face that must have spoke volumes, I shook my head no. “I believe I can handle it”, I said. We shared a laugh between old friends that comes from the excitement and the accomplishment of the moment.

This was a BIG smallmouth I had on, I had no doubt. I was gaining line , but for the most part this fish was having its way with me. It fought with a dogged determination that is so symbolic of this species, no aerial acrobatics , 44-degree water temperature had seen to that, just a steady heavy throb. Finally, after what seemed like an eternity of butterfly’s and white knuckles the fish began to give in, slowly at first, but with each turn of the handle it came a bit closer to the boat. There she was, I could see her now some fifteen feet down in the crystal clear water, jerking her head side to side in a last effort to rid herself of the hook. She was magnificent I thought to myself as Nolan slid the rubber net under her. I let out a sigh of relief and just stared in amazement at the size of this smallmouth I had just caught. The scales told the story eloquently 5 lbs.,2ozs., I was right, that WAS a big smallmouth. 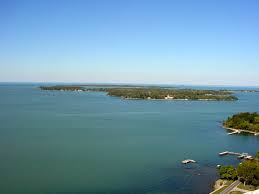 “Lake Erie” is far and away the best smallmouth lake in America, nothing else even comes close” stated Dan Surra of the In Fisherman Show and Magazine. “There are just so many four pound fish being caught it’s incredible, a five pounder rates but a brief mention here” he added. I can attest to the truth and wisdom of these statements for on this, my FIRST day , I caught and released 6 smallmouth over five pounds, and 2 that were over 6 pounds . Talk about being in the zone, man I was in the TWILIGHT ZONE. Great days such as the I one just described happen from time to time on this storied fishery.

Thanks to the efforts of the New York State DEC, this outstanding fishery is there for all to sample and enjoy. Beginning in the spring of 1995 the eastern basin of Lake Erie was opened as a “Trophy Fishery” for smallmouth bass by the state with a creel limit of one fish per day over 14″. The season opens the first Saturday in May and coincides with the opening of the walleye season. The first few years there was little if any pressure, but in the past five years this area has become a hot bed of early season smallmouth fishing that has been sampled by fishermen throughout the country and Canada.

With out a doubt my favorite time is the first week of the season. Over the period of the past five years our records indicate most of the smallmouth we have caught that were over 6 pounds were taken during this period. Memorial Day weekend will coincide with some of the very best action you will ever find. This in my opinion , will offer you the best shot at finding that proverbial “Pot Of Gold”, and striking it rich with one of those 100 fish days. The action from June to mid July is still quite good, but with less of the really large fish being caught. Mid July through the end of August the action slows somewhat, but can still be quite rewarding. September through October can be some of the best fishing of the year and would be my second choice as “Best Bet” . The numbers and the size pick up as the “attack formations” of marauding smallmouth put on the fall feed bag. The action at this time can literally be non-stop and the fight these hefty Bronzebacks put up can make one pause to wonder what type of heart medication may be available. Few other fresh water fish rival their aerial acrobatics during the fall. Just try keeping them in the water.

Our “home base” so to speak is Dunkirk, New York. Located some thirty odd miles from Buffalo, New York. Lodging and meals are readily available in the area. My recommendation would be the Roadway Inn, which is located less than a ½ mile from the State Launch on Rt#5 . For accommodations call (716)366-2200. There are a “bevy” of fast food “joints” in the immediate area for those thrifty minded individuals and a service station and mini-mart directly across from the ramp that’s open 24 hours.

My personal preference is the grub, but tube baits and many other offerings will get the job done. I like the “Bobby Garland” hyper tail grubs in the following colors. 1) Mossy Green/Black Flake 2.) Avocado 3) Pumpkin/Green Flake. For tube fishing my preferences are the “Bobby Garland” Gitzit in the following colors 1) Green Craw 2) Pumpkin/Chartreuse 3) Smoke/Chart Red Flake. The predominant forage species is the Emerald Shiner and for that reason I really like the green hues. Just about anything you usually use to catch smallmouth on your home water will work here. You should have a large assortment of lead heads ranging from 1/16 to 3/8 ozs, these will fit all the situations you may encounter.

I have three rods set up at all times with a different size jig head on each. This allows me to quickly adapt to whatever the situation dictates. I prefer a Daiwa 6’10″ finesse spinning outfit paired with a Team Daiwa 1300 spinning reel spooled with 8 lb Berkley Trilene XL (Green). I would not recommend using a rod shorter than 6’6″. Much of the fishing we do is drifting over structure breaks in depths ranging from 18 to 40 feet in the early spring and the longer rod lends itself more readily for that job. Any quality rod and reel will handle the job nicely.

The main draw back to fishing Lake Erie in the early spring is the weather. Fronts are constantly moving through the area and conditions change almost hourly. If you plan to go for five days, you may be lucky to get out only twice. But most time’s two days is enough. Remember that this is a very large body of water that can get “nasty” real quick. Give her the respect she deserves. Remember , discretion is the better part of valor. Have a ball and hold on!