Early Spring starts as early as late January in the deep South to right after ice out up (April or even May) in the North East. Early Spring temperatures should generally defined as from 32 degrees to 50 degrees. Even before the ice clears away from the launching ramp, brave souls have broken through the ice to launch their boat to get to the ice free areas. In those areas that are ice free the water temperature is usually in the upper 30’s to low 40’s. While to most people that seems way to cold to start fishing you have to remember that the bass have been inactive and mostly in the dark for 3 or 4 months and with the ice gone and the sun warming the water to around 40 degrees that’s about an 8 degree jump in a relatively short period of time. The bass are going to move up into the shallows where the water is warmer and to look for whatever forage fish(perch, sunfish, minnows, etc.) have started moving around.

The best areas to find would be shallow water flats or ledges next to deep water. Such as coves on the Northern side of the lake. The reason that they warm up faster is that as the days get progressively longer and the sun moves higher in the sky the Northern areas receive more sun and therefore warm up faster. Also during the early Spring any cold fronts that move through generally bring winds out of a Northerly direction and the Northern sections of the lake would generally be protected from the wind.

Some good choices of lures would be to use natural colored crankbaits, spinnerbaits, suspending jerk baits or jigs. The best colors would be perch, shad, crawfish for crank baits. For spinnerbaits the best colors would be alewife, chartreuse, white, blue, or any combination of those colors. Jig colors generally would be black, black/blue, blue, crawfish and would be fished with a trailer either pork or plastic. Although this time of year a pork trailer would be better since it would be more flexible in the colder water. 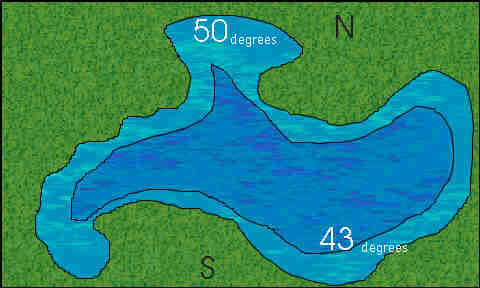 This time of year if you start early in the morning it would be best to start off with a slow retrieve at first. Increasing and varying your retrieve and speed as the water warms up.

Remember even though the water is still cold, as it gets warmer throughout the day it is still an increase in temperature and the bass will become more active! At first start in no more than in 10 feet of water and work your way shallower. Don’t be afraid to throw your lure shallow even if you think that the water is too cold for them to be that shallow, you just might be surprised!

Types of retrieves should range from an extremely slow crawl along the bottom with either a jig or crankbait or slowrolling a spinnerbait to “burning” a crankbait as fast as you can.You should also use as light a line as possible. This is for several reasons, the most important one being that it gives your lure more action and allows it to act more natural. Of course it all depends on the type of cover you are fishing, use your best judgement and common sense.

If you are using crankbaits particularly balsa wood like the Rapala’s replace the treble hooks with a set that are 1 size larger than what’s on there. Use a stop and go retrieve, the bait will generally suspend or will rise extremely slow when you stop the lure. This is an excellent technique to use if the water is still cold and the bass are being a little finicky. When you stop the lure watch your line because you generally will not feel them hit. All you will see is a twitch in the line.