With the deer hunting season fast approaching in many areas of the country, many deer hunters are looking for buck sign in their favorite patch of woods. Rubs happen to be one sure sign that a buck has been in the area. Doe deer don’t make rubs.

Over the years it seems that rubs are one piece of buck sign that most deer hunters mis diagnose when scouting. I’m not sure why, perhaps they haven’t taken the time to really educate their self on the different types of rubs. I’ve even heard old Grizzled deer hunters call deer scraps “rubs” and deer rubs “scrapes”.

I hope to shed some light on the different types of buck rubs and the timeline you’ll likely see these rubs.

Starting in late August through September in most parts of the country, you’ll start finding rubs on small bushes and saplings. In my area, the Sumac, Pine and Cedar are favored bushes that bucks rub on.

Bucks rub on these saplings at this time of the year to help remove the velvet from their antlers. In fact, it’s not uncommon to find these bushes with pieces of velvet still on them.

I’ve never seen a buck come back to these rubs on a routine basis. For them, these are simply a tool to remove velvet. They simply tell you that a buck, or bucks, have passed by and rubbed velvet off. Nothing to see here folks, just keep moving.

I was once told by an Old Timer that bucks rub on trees to mark their paths. Ummm….okay. I have a small problem with that theory. Bucks live in their little patch of woods year round, why do they need trail markers just for the fall? How would they find their trail at other times of the year? I’ve never bout that piece of advice personally.

The type of rubs I find during the hunting season leading up to the rut are what I call the Pre Rut Buck Rubs. These are rubs bucks make going to and from bedding and feeding areas. You’ll likely find many along deer trails.

Look for trees in your area that are very fragrant when the bark is peeled back. Sumac (called Shoe-Makes in my neck of the woods), Cedar and Pine are all favorites of bucks around here. Bucks love to rub trees like these. My theory of why bucks prefer these trees is that it’s possible the thick sap holds scent from their glands for a longer period of time. I believe these rubs are bucks letting other bucks know they’re in the area. Marking their territory so to speak. Kinda like your dog walking the perimeter of your yard and peeing on ever little bush it comes to.

It’s been my experience that bucks will make clusters of these rubs near their bedding area. Once you get outside of their bedding area, you’ll start to see rubs spaced apart along a trail. You can sometimes tell when and what time a buck made the rubs by looking at which side of the tree the rub is on.

If the rubbed part of the tree is facing the feeding area, it’s likely this rub was made by a buck on his way back to his bed. That’s generally in the Mornings.

On the other hand, if you find the bare part of a rub facing the thicker bedding area, it’s likely the buck made the rub in the afternoon or evening as he is heading to the feeding area.

In big woods areas, I’ve also found these types of rubs between Doe groups. I can generally find these along ridgelines or along remove waterways such as creek beds. 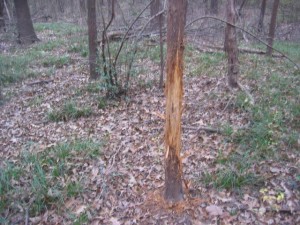 I don’t think that there is another piece of buck sign, other than a sighting, that will tell you that you’re dealing with a He Man of a buck.

I’ve heard several theories of why big bucks make sign post rubs. But in my opinion, they’re made to tell all other bucks to “stay clear, The Boss lives here.”

The buck that makes these rubs may rub smaller trees, and generally does. But I’ve never seen a smaller buck make a sign post rub.

I generally find sign post rubs near a bucks bedding area. When I find one, I start paying real close attention to the surrounding area and on which side of the tree the rub is. It’s not uncommon to find a sign post rub that has been rubbed entirely around the tree.

Most sign post rubs I’ve seen have been on trees 2 inches in diameter and larger. The largest one I’ve ever seen was on a Cedar tree back in the sticks in Eastern Oklahoma. The tree was nearly 4 inches in diameter.

If you find an area that has fresh sign post rubs and dead trees from previous years rubs, you’ve found the Mother Load. This tells you the buck has lived here for at least two years.

I’ve known hunters who found a few rubs on small bushes early in the year and hunt the entire season over those rubs. Like I said earlier, those early season rubs don’t amount to anything other than getting rid of some velvet.

The rubs you really want to concentrate are the ones made in the Pre Rut. These are the ones that Bucks will generally follow, simply because they make them along their paths.

Here’s a hot deer hunting tip for you. When looking over trails, look parallel on both sides of the trails for buck rubs. The reason why is that some smart old bucks will not travel down the same trail as does and smaller bucks, but will travel parallel downwind. If a Buck is paralleling a deer trail, I generally find it around 50 to 70 yards on either side of the main trail. Smart old bucks know it’s not wise to walk down just any old trail in the Fall!

If I find one or more sign post rub, then I try to back off just a ways along the route I think the buck is coming into or exiting his bedding area. I pick a spot where I have favorable wind. Many times, I’ll only be able to hunt this stand a few time during the season. The buck picks his bedding area because of the benefits to him, not because it’s easy for you to set a stand up on him!

Hunting Rubs During the Rut

During the rut, everything is off. By this time, if I haven’t killed a Buck, I’m switching tactics and hunting the Does. If a Buck is with a Doe, he’s not worried about making rubs and scrapes.

If he’s an older Buck but hasn’t found a Doe yet, he’s traveling looking for Does, making and checking scrapes and looking for Does. Generally he doesn’t have the time nor desire to make rubs.

In my opinion, hunting bucks along rub line during the Rut is low priority for me. The bucks are either going to be with the Does or traveling between the Doe groups.  (although they may follow trails that have rubs along them when traveling between Doe groups)

So get out there and look for those Pre-Season buck rubs. They’ll likely point out where your buck is traveling. Now all you need to do is find the best spot to take him in!