Click here for the Best Mosin-Nagant Scopes available in 2017! 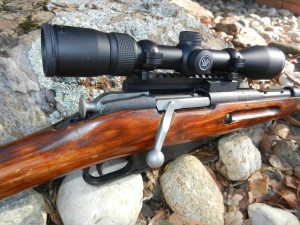 As far as cost-effective, affordable, inexpensive, but not cheap (as in low-grade) surplus bolt-action rifles are concerned, the Mosin Nagant rifle is one of the best. Marksmen, hunters, and the military all agree in regards to the quality of Mosin despite its relatively low price that might suggest you’re compromising something major to use it, but that’s not the case—it remains accurate and deadly.

In regards to the Best Mosin-Nagant Scopes around, just keep on reading. The scopes outlined below are all capable of keeping up with the ruggedness of the rifle and even the 7.62X54R and its economical chambering. You need scopes that can take rounds of the Mosin-Nagant, which are similar in performance compared to the 30-06 round.

Yes, before the dawn of fog proof, nitrogen-filled lenses, the idea behind the Firefield PU Mosin-Nagant/SVT-40 Scope for Mosin Nagant usage has already been developed. This scope was manufactured about 40 years later, in the 1980s. If you’re unable to find the original vintage scope from 30 odd years ago, the Firefield PU serves as a replica of the Eighties Edition of the scope. It has all the bells and whistles of the original and it’s brand new instead of used to boot.

It specifically has the 3.5x fixed magnification of the original. Thusly, it’s a fixed rather than variable scope. Outwardly, it’s similar in every way to the 1980s scope including the mount. That’s where some people might have issues with the PU. Gun owners might think this is a plug-and-play deal, but as far as the Mosin-Nagant is concerned, therein is the rub. You need bolt handle conversion in order to mount the scope. In addition, you should drip the tap to the receiver’s left side in order to have a secure scope mount when everything is said and done. You might even have to mill the receiver’s side in order to get a flat enough surface to secure your Firefield PU scope for a perfect fit.

After proper installation, though, you’ll still need a cheek rest for you to to get a proper cheek weld. This is the extra “hidden” cost you’ll get from acquiring your own Firefield PU Mosin-Nagant/SVT-40 Scope. This riflescope is therefore recommended for gun owners who wish to build their own WW2 era rifle replica with fixed optics. Not recommended for long-range shooting and sniping. It’s recommended that you get a gunsmith to help you out with installation and mounting up to the hex barrel. Aside from that, expect close-range magnification, three-post reticle design, and multi-coated lenses housed on a reliable and durable scope.

This mosin natant scout scope and its specifications are perfect for more up-close-and-personal hunting expeditions against big game and immediate target acquisition within 300 meters that’s not obscured by foliage. The NC Star Mosin-Nagant 2.5-10×30 Illuminated Scope fits the scout riflescope description much closer than the Firefield PU due to its reticle choice, illumination, and specs that are more in-line with the scouter requirements outlined by Col. Cooper.

The scout scope lives up to the tenets of a scout rifle by having a long eye relief, the requirement that it’s mounted on the chamber of the rifle, and the like. As far as Mosin-Nagant usage is concerned, the scout scope concept is the most dependable for its requirements in light of the lack of rearward mounting options of the firearm. At any rate, the NC Star Mosin-Nagant 2.5-10×30 Illuminated Scope lives up to its scout riflescope designation by including a mount package that’s made in China (the company known as NC Star of China, to be specific). The magnification for this scope is a fixed 2.5x (lower than that of the PU) and has an illuminated reticle with a crosshair pattern that’s Duplex.

In regards to how it compares to the Firefield PU Mosin-Nagant/SVT-40 Scope, it actually competes favorably since the included mount with this Nagant scope means you won’t need to find a gunsmith to file or drill anything into your beloved Mosin-Nagant rifle. It won’t cost you extra just to mount the scope, plus it costs way cheaper too. This automatically makes the NC Star scope a superior scope to the PU. Plus, it has relatively clear optics, the aforementioned mount that require Loctite in order to ensure the tightness of the screws, a long eye relief, 30-millimeter objective lens diameter, and a set of black scope rings. It’s a must-buy all-in-all.

This is quite significant because this is so far the only scout scope with a higher range than 2x-3.5x. It also outdoes the NC Star Mosin-Nagant 2.5×30 Illuminated Scope and the Firefield PU Mosin-Nagant/SVT-40 Scope in terms of having a range finder. More to the point, the crosshairs of the scope has a range setting on it that’s measured by 25-yard increments from 100-225 yards.

The scope doesn’t have a mount like the NC Star scope, though (even though it possesses rings). You can see longer ranges by keeping the scope at higher magnification ranges, zooming in onto your targets or game from a distance in order to better hunt them in a scouting rifle sort of way. It’s more difficult to get target acquisition from afar with this scope compared to, say, a regular 3x-to-9x scope. Then again, you are dealing with a Mosin-Nagant that requires long eye relief and magnification from the get go just by the way it’s built and what kind of firearm it is (it truly is the definition of a scout rifle as proposed by Col. Jeff Cooper).

Regardless, this is a must-have scope all the same when you take into account that it’s a perfect fit for your Mosin-Nagant rifle. It has advantages compared to the previous two scopes in terms of magnification and the like. It’s also quite lengthy at 11.25 inches. Most importantly, you don’t need to have a budget of $500 just to get your firearm a decent scouting scope.While the scope is mounted, you can add weaver type rings and scope lens caps at very affordable price. You’ll see sharp and bright images when you look through the scope, and the adjustment is a precise quarter of an inch in clicks with tactile feedback.

To break it down, the reason why the Burris Scout was able to make it to this list of fine scout scopes for your Mosin-Nagant gun is because it has impressive specs that collectively serve as a better fit scout rifles than other scopes do. While the Aim Sports 2-7X42 30mm Scout Scope/Rangefinder is impressive with its variable magnification ranges and rangefinder attributes, the Burris Scout is the better scout rifle because it’s fixed at 2.75x and its 20-millimeter objective that’s great for that level of magnification.

What’s more, it has more specs and benefits than either the NC Star Mosin-Nagant 2.5×30 Illuminated Scope or the Firefield PU Mosin-Nagant/SVT-40 Scope to boot. Sure, it’s a significant price leap, but it’s not too great a leap when you consider that every last extra dollar and cent is worth it. The Burris Scout 2.75 Model comes complete with advantageous durability and ruggedness that’s perfect for a powerful gun with equally powerful recoil, a crisply bright reticle, and crystal clear glass. Furthermore, shooters are allowed to reach out beyond 200 yards in a consistent fashion, thus removing the element of trial and error or guesswork into your hunting experience. Every shot is made to count with the Burris Optics Scout Heavy Plex Reticle Riflescope.

It also helps that the Burris Optics has that Heavy Plex Reticle that as straightforward as you can get when it comes to crosshairs. Sure, you can’t measure distance with it rangefinder style like with the Aim Sports Scout Scope/Rangefinder, but it gets the job done in the way a scout-specialized rifle is supposed to. It’s constructed with a shockproof one-piece tube (fewer moving parts, fewer points of breakage), quad-seal gas that’s reinforced and sealed to be fogproof and waterproof, lenses that are Hi-Lume multi-coated, and hunter turrets. Most importantly, its warranty lasts forever. If it breaks within your lifetime, it will be replaced as discussed in the company’s warranty policies. What more can you ask for?

This scope can switch its reticle colors from red to green depending on your backdrop. If it’s an area filled with evergreen foliage, naturally the red reticle will best suit the 300-meter, crystal-clear imagery of your scout riflescope. If it’s dusk approaching twilight and everything has an orange or red tinge to it, you can switch to the green reticle to have better crosshairs aimed at your target, whether it’s a flying bird, deer, or bears. It’s a fixed scope with no magnification (1x).

However, as far as eye relief is concerned, it has plenty to spare. In regards to magnification power, some amateur hunters are under the mistaken impression that more magnification equals better scope. That’s not necessarily the case, especially with scout scopes that are supposed to be close-range. If you argue that you don’t need a fixed close-range scope because variable scopes have close-range settings, then you should realize that these settings usually aren’t that good and you might end up with a blurry look (not to mention parallax problems within or above the 9x range). At any rate, another claim to fame that the Bushnell Trophy has as a Mosin-Nagant scope is its amazing rapid target acquisition.

It’s also absolutely parallax-free because it’s magnification free. You might think a 1x lens is pointless since you have eyes and open sights, but optics will always be easier to acquire targets with than steel sights because you don’t have to line up anything save for your crosshairs. You also have far fewer mounting problems with this compared to the infamous Firefield PU Mosin-Nagant/SVT-40 Scope and its mounting issues since you can securely mount the Bushnell Trophy Multi Red/Green Dot Reticle Riflescope with a Picatinny or Weaver style rail. If you want to bring your Mosin-Nagant rifle to the 21st Century, then a gun sight or scope from Bushnell with variable reticle colors might just do the trick for you.

In any case, these scopes are the top ones to go with the Mosin-Nagant as far as making it a dependable scout rifle is concerned. The Aim Sports 2-7X42 30mm Scout Scope is the most expensive and has the most utility, Aim Sports 2-7X42 30mm Scout Scope has the most magnification power, the Firefield PU Mosin-Nagant/SVT-40 Scope has mounting issues but is truly a vintage treat, Bushnell Trophy Multi Red/Green Dot Reticle has great target acquisition, and NC Star Mosin-Nagant 2.5×30 Illuminated Scope is the most like a scout riflescope.

Click here for the Best Mosin-Nagant Scopes available in 2017!